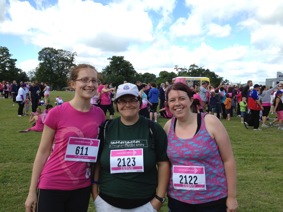 I’d planned to fit in plenty of training sessions before the big day, but the weeks running up to the event were especially busy and I missed more scheduled jogs than I ran.  As the Sunday loomed, I was seriously worried that I wouldn’t make it around the course without a great deal of staggering!  At least light rain was forecast, I thought.  I’d be exhausted but cool.  Sunday morning dawned too soon, and far too bright… not a cloud in the sky!  I walked through Ipswich to the park, phantom twinges jolting through my legs which I imagined would send me sprawling at the first corner, worrying whether I was wearing too much, or too little, did I have enough water, would there be hills?  All was forgotten as I met up with Tasha, Helen and Vanessa, and mingled with the crowd of women and girls of all ages, busily donning their race numbers, pink accessories, and in some cases, full length fancy dress costumes!  We were led though a fun warm up routine from the stage, reminded of why we were there by speakers and organisers, and then led into position: runners first, then joggers, then walkers.  The four of us fell in with the joggers, just behind a green dragon and a little girl with wings and a pink tutu.

The run was really very hot, and time seemed to stretch out between each km marker to the point where I was convinced I must have passed the 4km mark ages ago and not spotted it, when in reality it was still up ahead.  At 22 minutes into the race the loudspeakers announced the first runner had crossed the line, and from then on a steady stream of congratulations was beamed out across the park.  There were hidden surprises along the way: turning a corner to find a band starting up a cheery song; a choir hidden in a valley near the 4km mark singing ‘the show must go on’; and the way the course dipped in and out of the park centre, so our supporters could keep track of how flustered and red we were getting.  It was an amazing sight: a ribbon of pink winding its way around the entire park – so many women running to support the cause.  I’d settled into a dogged slow pace by the end and it was almost a surprise to see the finish line looming.  I put on a final burst to sprint the last leg, grabbed my goody bag and water from the stewards, and promptly flopped over onto the nearest free patch of grass to try and cool down.

Despite the heat it was a fantastic experience, and I was up and jumping around after a good few minutes rest, cheering people on from the side-lines.  I managed to get around the course in 33 minutes, which I thought was fairly respectable and a lot faster than I’d thought I’d be.  Still, I’ll have to try and beat it next year!

Over the past few years I’ve noticed myself picking up more and more hobbies and ideas: coming up with endless new and exciting things that I want to try, getting the hang of them, and then moving on to the next one.  My pessimistic side would note that this probably started in school, when the pressure to choose your career path was pretty intense.  Other kids were happily applying for medicine, law, engineering, and all those other good solid options, while I dithered around wondering why there wasn’t a job that involved books, learning about trees, art, writing, and wandering around in the mountains and forests in the career centre manuals.  Until then, we’d been able to engage in a spread of subjects, and by the time A Levels finished I still hadn’t decided on just one that I wanted to pursue.  My optimistic side would argue that my brain is a multi-coloured sponge, and all the random skills, ideas and experiences that I pick up will re-emerge through my artwork at some point, and in the meantime make life a lot more interesting.  Here’s what has been keeping me busy recently:

At the end of May I stocked up on double cream and set about learning how to make chocolates.  I’d intended just to make a selection of plain ganache-filled chocolates, but soon started pulling in random ingredients from the kitchen stores, resulting in some unexpected successes (the sweetness of homemade quince jam was matched perfectly with very dark chocolate filling.  Baileys ganache was a more predictable winner) and one inedible failure (not being bothered to wait for the sugar to melt properly led to a pretty dismal minty batch).  It was all rather unscientific, but turned out surprisingly well.  And now my candy thermometer has arrived I’ll be making a few more – when these heat spells have settled down a bit.

For two years running I’ve attended the Rodings Rally orienteering event in Epping Forest.  This involves turning up at 9pm, being given a map of the forest with a selection of clues, and then powering through the forest until the sun comes up the next day looking for 10 very small, unlit tents.  The whole route is 12 miles as the crow flies, but in reality it’s possible to spend hours scouring a small area looking for a tiny tent hidden in some brambles.  As my only experience of orienteering, I assumed all that was normal.  So when I went for my first proper orienteering event on the 20th May in Chantry Park, I was astonished at how easy it was…  The points are already marked on the map!  There are lines showing you the routes between them!  They’re each housed in a giant neon bag!  Sufficed to say, I had great fun, and ended up doing another event in Bramford on the 30th.  The boiling, muggy heat broke half way through doing the Bramford course, and we ran through that marvellous big ploppy kind of summer thunderstorm rain while lightning danced between the clouds overhead and the sinking evening sun illuminated everything.  Magic.

On the 31st I went wine tasting at Arlingtons Brasserie in Ipswich. We tried out a range of whites and reds and were talked through the differences before guessing the grape type and country of origin in two blind tastings. It was fascinating to hear how the subtle variations in taste are created, and how to recognise where a wine comes from just from its smell.  I’d definitely like to go again, but the evenings are so popular they’re getting booked up two months in advance!

Last weekend was the annual Oyster Fayre in Colchester: a medieval fair featuring falconry, knights battling in the tourney ring, a weekend long archery competition, and more stalls, musicians and performers than you could shake a knight’s lance at.  The weather held out, I tried oysters for the first time (not too bad- salty seafood), ogled at very pretty weaponry and acquired a mild sunburn.  A brilliant day out. 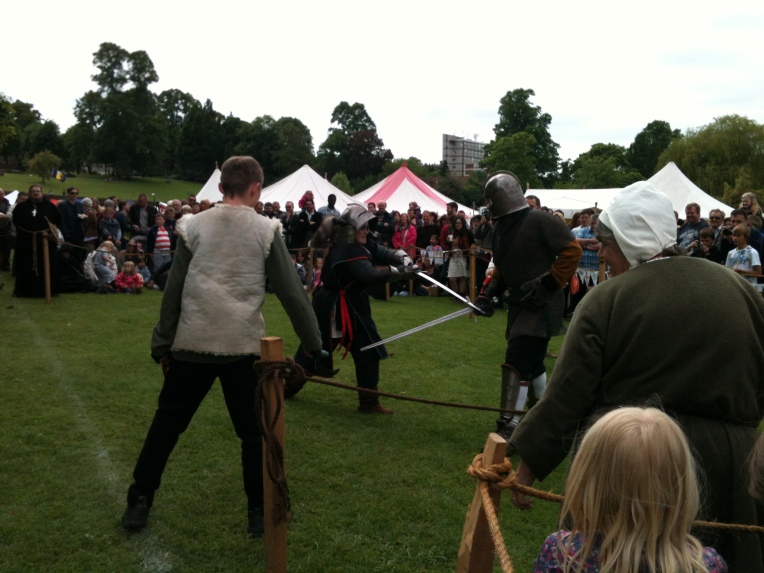 The weather turned on its head for Sunday, where I helped alongside Rotaract at a fete in aid of Children of Pulilian.  Despite the endless rain we sold plenty of raffle tickets, and I got a good look around the abandoned St Clements Hospital site.  I love abandoned and decaying buildings, so I’ll have to get back there with a camera someday.

Finally, this Saturday I attended a bookbinding course in Cambridge, but that was rather special and deserves its own post.  So that just leaves this afternoon’s archery session, and I’m up to date (for the moment at least!)